All About Pavé Diamonds - Bridal Rings

All About Pavé Diamonds

Pavé diamonds are a beautiful— and very common— addition to fine jewelry. You’ll find lines of glittering pavé diamonds adorning countless engagement rings, wedding rings, and non-bridal diamond jewelry designs. But what exactly are pavé diamonds and why are they so popular? Are pavé diamonds real diamonds? Read on to discover the answers to these questions and more as we go over everything you need to know about pavé diamonds.

What are Pavé Diamonds?

Pavé diamonds are diamonds that are enclosed in pavé settings. So, while the term “pavé diamond” sounds like it’s describing a type of diamond, it’s actually describing how a diamond has been set in jewelry.

Pavé settings hold their enclosed gemstones in place with tiny metal prongs or metal beads, creating the look of a continuous line of diamonds. Pavé (pronounced “pah-vay”) is a French word that means “paved.” Pavé settings got this moniker because they can make a piece of jewelry look like it’s been paved in diamonds.

Pavé settings almost always hold round- or oval-shaped diamonds or gemstones, since these lend themselves to creating a seamless effect on both flat and curved surfaces. Note that while pavé settings are most commonly used to hold diamond accents, any gemstone can be used in pavé settings.

The Advantages of Pavé Diamonds

Pavé diamond jewelry is incredibly popular. Why? Because pavé diamond settings offer many benefits, including: 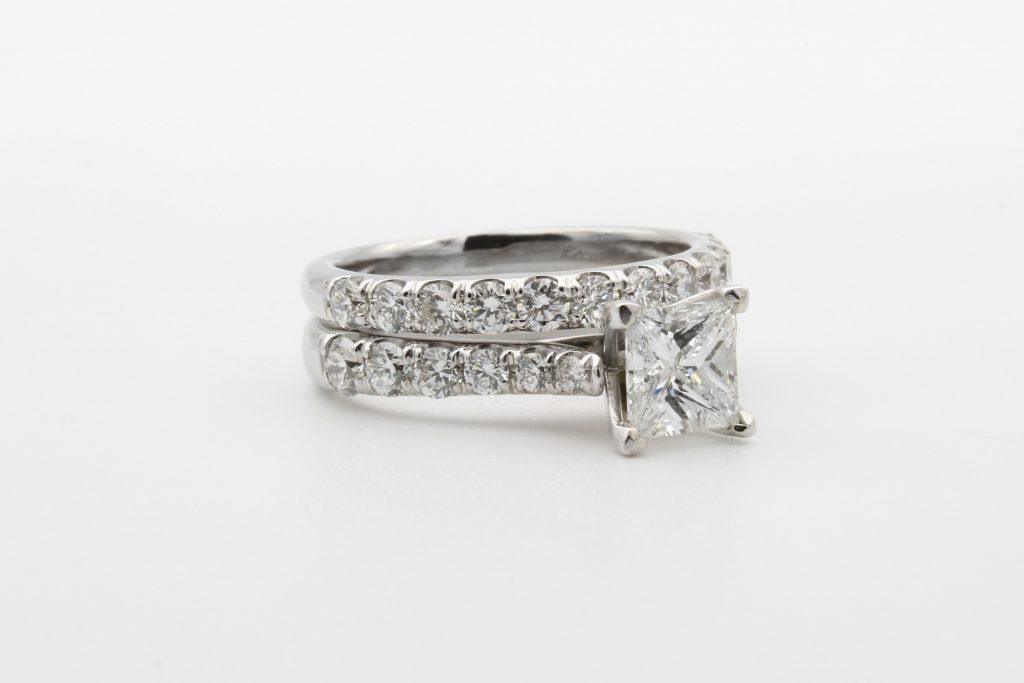 Yes! Pavé diamonds are real diamonds that have been enclosed in pavé settings.

Which diamond shape works with a pavé diamond band?

All diamond shapes look gorgeous with pavé bands. The most popular center diamond pairing is a round brilliant cut diamond, but fancy shapes like oval and pear look equally stunning with pavé bands.

Can you replace a lost pavé diamond?

Yes! Replacing a pavé diamond is generally easy and not particularly expensive. To minimize the risk of needing to replace a pavé diamond, be sure to get your jewelry professionally cleaned from time to time. A good jeweler does more than just remove dust and grime during a cleaning. They’ll also check your settings to make sure your stones are safe and secure.

Can you resize a pavé diamond ring?

This depends on the design of the specific engagement ring, wedding band, or fashion ring in question. If a ring’s band is entirely covered in pavé diamonds (this is called an eternity band), resizing it will be challenging or impossible. If a ring has a half or three quarter pavé band, a highly skilled jeweler can probably resize it for you. Note that it may only be possible to resize a pavé band around half a ring size. This is due to the structural issues that may come with making drastic changes to diamond or gemstone bands.

What is a pavé diamond shank?

Because pavé diamonds are generally very small, people sometimes think that the “pavé diamond” means “small diamond.” However, this is not the case, since the term pavé diamond describes how the diamond has been set in its jewelry, rather than any quality of the diamond itself. If you’re looking for the term for tiny diamonds, it’s “melee.” According to the GIA, small cut diamonds that weigh less than 1/5 carat are called melee diamonds.

Can gemstones other than diamonds be used in pavé settings?

Absolutely! Using colorful gems like sapphires and rubies in pavé settings can add a lush, vibrant, and unique touch to a piece of jewelry.

What ring style is a pavé diamond engagement ring setting?

Any style of engagement ring can feature pavé accent diamonds, so there’s no one style category for pavé engagement rings. With that said, a lot of pavé diamond engagement rings could probably be described as either classic or modern, since pavé bands are extremely common for these ring styles.

Can you have pavé accent diamonds on a solitaire engagement ring?

No products in the cart.

Come in as a novice, in an hour, leave an expert.